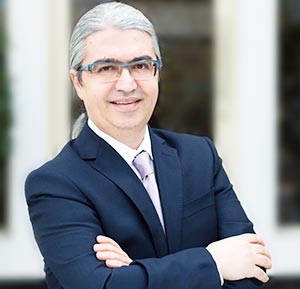 It is not possible to talk about hair transplant in Dubai without mentioning Dr. Cagatay Sezgin’s name. He has been a highly regarded member of the esteemed International Society of Hair Restoration Surgery (ISHRS) since 2001. His passion and prowess for hair transplants have earned him a well-deserved eminence among his fellow surgeons. Due to his expertise, he has become the First Turkish Board Surgeon authorized as a member of ISHRS. Moreover, he is a member of The Asian Association of Hair Restoration Surgeons (AAHRS).

Dr. Sezgin has been practicing for about 20 years in the field of Hair Transplantation and Restoration. Of these 20 years of his experience, he has served for nearly 15 years in Turkey. After successfully serving in Turkey, he moved to Dubai in May 2016 to serve as a Full-Time Hair Transplant Surgeon. Since then, he has been permanently residing in Dubai.

Dr. Sezgin is a specialist surgeon but his entire career has been devoted to hair restoration through the FUE Hair Transplant technique. By now, he has successfully performed more than 3000 hair transplant surgeries. He also holds a record of being the First Hair Transplant Surgeon in the world to perform Hair, Eyebrow, and Beard transplants in a single session for a single case. He called the case a Head Trick Operation. It was published in the ISHRS’s esteemed Forum Magazine Vol. 29(1) in 2019.

Apart from performing successful hair transplants, Dr. Sezgin has also been involved in organizing training seminars and workshops. He has also been mentoring and training several new doctors from all around the world. One of his most recent achievements is being invited as an operating faculty member and moderator to the world’s most prestigious hair transplantation workshop: ISHRS-World Live Surgery Dubai Workshop March 2018. Moreover, he has also been asked to improve the new edition of The Holy Book of Hair Transplant Surgeons, edited by Dr. Walter P. Unger.

Although Dr. Sezgin is an expert in his field, he continues to expand his knowledge of hair restoration and transplants. He regularly attends seminars, conferences, and training workshops all around the globe. He has been a part of several educational sessions in different countries including Turkey, the UK, the US, Netherlands, and the Middle East.

Dr. Sezgin has acquired his degree in medicine from Çukurova University’s Faculty of Medicine. During his final year there, he qualified in a student exchange program by passing the examination with distinction. He was selected from hundreds of students to join a medical training program in Madrid, Spain.

After completing his training, he started his career as a General Practioner. However, he did not stop advancing his studies and continued for specialization in Medicine simultaneously. Once he cleared all his examinations, he enrolled in Osmangazi University Faculty of Medicine to major in General Surgery.

As soon as he completed his graduation, he joined Osmaniye Public Hospital in Turkey. He served as the Assistant Chief Physician and Manager of Operating Room, Emergency, and Intensive Care Units for about a year. However, his passion for hair transplant and restoration did not let him serve in any other position. So, he soon established Adana Marmara Estetik, which is a pre-eminent hair transplant clinic in Turkey. In order to be recognized in the field of cosmetic surgery, he also joined the certification program organized by the Turkish Ministry of Health. He was awarded his certificate as a Medical Aesthetician by the ministry.

Once Dr. Sezgin established his status as a Medical Aesthetician, he became a member of several notable organizations. The most prestigious and well-known hair transplant society in the world, The International Society of Hair Restoration Surgery (ISHRS), accepted him as a member. Currently, Dr. Sezgin is among the top celebrity hair transplant surgeons in the world.

Dr. Cagatay Sezgin is a member of the following esteemed and well-known societies:

He has attended the ISHRS annual meetings in the following countries:

He has been a part of the following courses in different countries:

He has attended the following workshops:

He has also been invited to: